At the Great Temple in Jerusalem the annual tax levied was 1/2 shekel per male. The 1/2 shekel and shekel were the only coins accepted by the temple, so money-changers sat outside the temple and converted other currency to the accepted type of currency, which was the half-shekel of Tyre. The money-changers were NOT money-lenders, as is so often misinterpreted by modern-day preachers who like to characterize all Jews as loan-sharks. They did charge a small fee for the service, but they sat at the temple all day, and this service charge was the only means of income that they had available to them.

After the coinage of Tyre was debased under Roman control, Herod the Great began to strike "Tyre" shekels in Jerusalem. These coins were of cruder fabric and style, but maintained the necessary silver purity required by Jewish Law to pay the temple tax.

The Greek letters "KAP" are an abbreviation for "KAICAP", the Greek word for "Caesar".

The shekel of Tyre is the most likely candidate for the coin used to pay Judas Iscariot for betraying Jesus because it was the most easily accepted coin in business transactions of the day, and was well-recognized and quite ubiquitous.

Matthew 26:14-16 "Then one of the twelve who was called Judas Iscariot went to the chief priests, and said to them, 'What will ye give me if I deliver him to you?' And they paid him thirty pieces of silver. And from that moment he sought an opportunity to betray him.'"

When Jewish pilgrims came to the Jerusalem Temple from other parts of the Greek and Roman world, they found money changers set up in the temple court competitively advertising exchange rates for the locally accepted Shekels. The method of advertising was a loud voice. It was this din of yelling and screaming over the sounds of the service within the Temple that Jesus found offensive, and he scattered the coins on the tables of the merchants and expelled them from the Temple. In point of fact, it is most likely that the money-changers had carpets on the ground and not tables, but the translators of the Western versions of the Bible were not familiar with ancient cultures.

Matthew 21:10-13 "And when he entered Jerusalem, all the city was stirred, saying: 'Who is this?' And the crowds said, 'This is the prophet Jesus from Nazareth of Galilee.' And Jesus entered the temple of God and drove out all who sold and bought in the temple, and he overturned the tables of the money-changers and the seats of those who sold pigeons. He said to them 'It is written, My house shall be a house of prayer but you make it a den of thieves.'"

The Temple Tax half-shekel can sell anywhere from $200 to $20,000 depending on a great number of numismatic variables; quite often, the differences are undetectable to the inexperienced eye. When considering the psychometric factors, the numismatic values are of little or no consequence.

Often the psychometric value of a coin will be determined by the fact that no other coin in the world has captured those psychometric impressions. Sometimes a very degraded coin with high psychometric value will have a higher price than the highest numismatic, when there is no other known example on the planet -- for instance, a half-shekel that is known to have been actually carried by Judas Iscariot, or a Gold Tribute Penny such as this one: 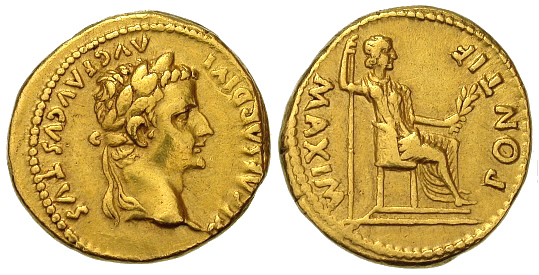 The "Gold Tribute Penny." The Gospel of Thomas 100:1-4 (excluded from the New Testament) tells a slightly different version of the "Tribute Penny" story..."They showed Jesus a gold (coin) and said to him: Caesars agents demand taxes from us. He said to them: Give to Caesar what belongs to Caesar; give to God what belongs to God, and give to me what is mine."

This coin as pictured is available for anywhere from $4,800.00 to $22,000.00, depending on many variables. Compare the Tiberius above at $4800 -- which I would neither buy nor sell, for both numismatic AND psychometric reasons -- to the one pictured below, which is an incredibly well-preserved Mint State, absolutely unconditionally guaranteed genuine, with an unburnished obverse and stunningly full reverse AND a HOT high psychometric read; the one below is currently available from me -- subject to prior sale -- at a very modest price of $22,500.00: