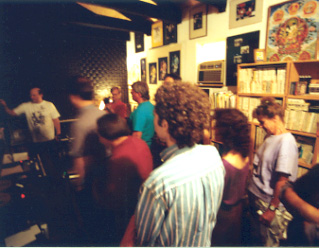 VoT Vortex is a Time-Tripping game; it's also a Shape-Shifting game, because not all limetimes are alike.

The game comes with an 8 1/2" x 11" laminated board. You can also order a much larger table-sized PRO board mounted on a firm polyfoam base. The PRO board is more elaborate, has WEATHERED BUILDINGS and MINIATURE 1/25th SCALE TERRAIN FEATURES. It costs $450.00, but is well worth the difference; it is basically a HEX LAYOUT on foamcore base, with many expensive items used in its HAND-MADE manufacture. The BASIC VoT Vortex PRO TERRAIN is expandable using the HEX CONNECTORS provided at Official Tournament VENDOR TABLES. VoT Vortex was designed by E.J. Gold to introduce players to the idea of redirecting energies and establishing a psychic vortex through the use of a variety of artifacts ancient and modern.

How it works is this: you can play the game as it's written, moving pieces around the board by dice throw and card indications, or you can merely place and replace the pieces containing artifacts of various kinds in different relative positions.

The pieces are air-tight acrylic capsules which may contain virtually any artifact small enough to fit within the capsule.

You will use two six-sided dice to cast your roll-move. Movement around the board is clockwise when rolling dice, counterclockwise when using card draw.

If one of your three pieces happens to land on a "draw" box, you MUST draw a card and move accordingly.

There are two teams; black and white, and your pieces are color-coded accordingly. Within each team are three different kinds of inserts, denoting Phalanx, Turret and Cavalry. Each of these is a company of 1196 men. Amazon Warriors and Archers are individuals and must be treated as such.

If your GAME PIECE (each "piece" is a playing counter which represents one unit of army strength) is taken, it may be captured, killed, or traded for an enemy's piece, determined by CARD outcome or 6-sided DIE ROLL.

Trade negotiations are ALWAYS dice-controlled; a single 6-sided die is rolled to determine outcome. GAME MASTERS mayu override this and handle verbal negotiations between players. A GAME MASTER may not own pieces or move any piece for a player.

A 20-sided die is rolled for outcome in PRO TOURNAMENT games, but home games are generally ruled by the six-sided die.

Lateral movement is forbidden. See the RULES posted at VoT Vortex Tournaments; a rule-book is available at all Tournament Games.

If there is a conflict between pieces landing on a square (only one piece can be on a square at any one time) the LAST landing piece rules the square and the previous occupant is captured. The captured piece is moved to the START square of its team line.

Should a piece land on the PIT square, a card must be drawn for penalty, and MARKERS must be surrendered in the quantity indicated on the card. Use an ordinary POKER deck for the card draw, or you can purchase the MARKER PENALTY cards at a Tournament.

If your piece lands on a PASS square, it is allowed to continue passage to the enemy base and back. No further throw is required at this time, so the piece is not considered vulnerable until the next turn.

Each DRAW square indicates VULNERABILITY and a SITUATION card MUST be drawn.

DRAW cards require RESPONSE, which is determined by a 6-sided die cast or in tournament, a 20-sided die is cast BY THE GAME MASTER, not the player, whose piece is now considered VULNERABLE.

Should a piece land on a ROLL square, if it is a ROYAL piece, which would be a CONSTANTINE or JULIA DOMNA, for instance, automatically casts a "zero" outcome, and remains on the landed square until the player's next turn. If a piece is COMMONER or WARRIOR class, indicated by a NON-ATTRIBUTABLE coin insert, it must roll TWO 6-sided dice at a time for the move, and take the "OUTCOME" given by the GAME MASTER, and move the piece or remove it from the board, accordingly. This can cause a KNOCKOUT or DOUBLING, should it land on an occupied square. If it does, the previous occupant is CAPTURED and sent to Vaults of Time at the center of the board for 3 turns. When a piece is in VoT, the player cannot collect rents or rewards and cannot demand ransoms.

The TURRET can move HORIZONTALLY or VERTICALLY only, and cannot combine horizontal and vertical movements; unless the TURRET is "Queened" with an Elagabalus or better, it cannot make DIAGONAL moves, but once QUEENED, it can move in any direction, any number of squares until stopped by a board limit.

INFANTRY or PHALANXES move in DIAGONALS only, requiring DOUBLES on the dice or no move.

CAVALRY moves in multiples of 3, and cannot move in single or double squares. A 3, 6, 9 or 12 makes a CAVALRY UNIT move. All other dice throws are "CONFUSION ROLLS" and result in NO MOVEMENT during that player's turn.

SHAPE-SHIFTERS and BARBARIANS, denoted by CELTIC or BARBAROUS coin types, are allowed to jump over PIT squares with a DOUBLES throw. Only one throw per move is permitted, but special weapons, runes and charms can override this option.

AMAZONS, denoted by a GREEK or CELTIC currency marker and sometimes, when permitted by the GAME MASTER, a PERGE or PROVINCIAL coin type, are allowed a straight-line board shot, one per landing, limited only by the border of the gameplay stile, with a percentage of DAMAGE indicated by a 6-sided SAVE THROW, cast by the injured party, provided the AMAZON does not land on a PIT square. Should the AMAZON land on a PIT square resulting from a MOVE THROW, the AMAZON may decide to give up a GOLD STATER marker to get out of PIT and proceed to the next nearest ROLL square.

TRAPPERS, denoted by the correct CELTIC Style currency marker, may lay a TRAP or BOMB at a square. This square shall then be "SET" with the appropriate "WEP", denoted by a WEAPONS MARKER, which will be a T type gaming piece loaded with the appropriate ROMAN, PROVINCIAL, GREEK or BARBARIAN Style coin-type insert as indicated in the Weapons Section of the TOURNAMENT gaming manual. In home games, this is to be decided by the GAME MASTER.

The player may select any 12 RESERVE pieces prior to gameplay; in TOURNAMENT games, the selection process is subject to the approval of the GAME MASTER and is determined by 12 consecutive 20-sided die rolls.

Should a player run out of RESERVISTS and the remaining pieces are taken, the player must retire from the game. Scores are recorded by the Rule Book Laws and a new game may then be started. In home games, the players may or may not decide to record the Scores. In TOURNAMENT play, the Scores determine the First ROLL of the new game.

Leaving a piece on the board indicates that the piece is in play until removed by CAPTURE, KILL or EPIC FAIL.

All other moves and outcomes are governed by the RULE BOOK. Obtain a Rule Book at any local or regional VoT Vortex Tournament, to help you understand the OUTCOME and COUNTERS in advanced play.